The journey began in Tokyo, which we reached in the evening after a train ride from Narita. The bustling hubbub of the airport retreated until we were left with only the occasional conductor’s announcement in Japanese – the very first times I would hear public broadcasts in a completely unfamiliar language. I have found that there is something very intriguing about knowing that information is being imparted but receiving none of it – it is both worrying and relaxing at the same time.

Upon our arrival to Mikawashima station, for which we had purchased the very handy Oyster card equivalent, Suica cards, a rumbling procession of luggage ensued to our nearby hotel. As the sights and smells were already enticing, we left again fairly promptly to find some true Japanese food – ramen! Luckily the bright picture menus displayed on the walls of the restaurant allowed us to order a bountiful meal, mainly through gestures and the occasional ‘arigatou’ mixed in for good measure. As a first taste of Japan, proper ramen was the perfect choice, as it also warmed us up from the downpour washing down the streets. The rain didn’t seem to stop the crowds in the station area though, many commuters entirely unbothered under their umbrellas. I quickly found that although England certainly experiences its fair share of water from the sky, in Japan the humidity during summer means that any shower will be very heavy!

Entirely satiated, we returned to base to attempt to sleep off the jet lag, only to be woken up at 5am by another new phenomenon for us – an earthquake! It’s a very odd sensation to awake feeling like you’re in a ship or some other moving vehicle, being shaken around, when instead you are just lying in the same bed that was certainly still before you went to sleep. I discovered afterwards that it was a magnitude 4.5 quake, which is certainly as big as I ever hope to experience. As this only lasted less than a minute however, the grogginess won over and I went back to sleep.

Waking up the next day proved no difficulty though, as I had the strong motivation of finally being able to visit the Studio Ghibli museum, situated in the outer edge of Tokyo. For those who are unaware, Studio Ghibli (apparently pronounced Jiburri by the Japanese) is an anime film studio behind many enchanting and beautiful films, from the well known Spirited Away and My Neighbour Totoro, to my personal favourites Princess Mononoke and Howl’s Moving Castle. Each of these masterpieces leaves the viewer with a heart-warming (and sometimes heart-pounding) sensation of visual and aural satisfaction, and upon arrival to the museum it was clear that the same effort had gone into producing a magical castle of delights worthy of the films it commemorates. From the spiral staircase to the beautifully painted scenes on the glass ceiling, and the rooftop garden to the full-sized cat bus where children can play, it’s easy to see why so many people flock to this place (and why they don’t allow any photos inside!). My favourite section was ‘Where a Film is Born’ which is a collection of studio office rooms filled to the brim with trinkets and art materials, and most spectacularly, hundreds of sketches and paintings of film scenes tacked to the walls. 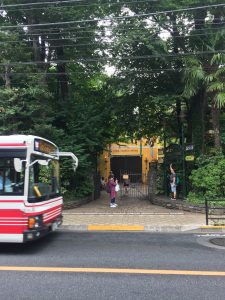 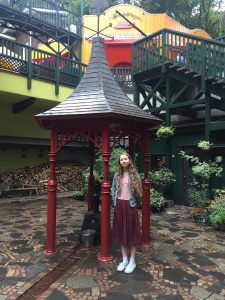 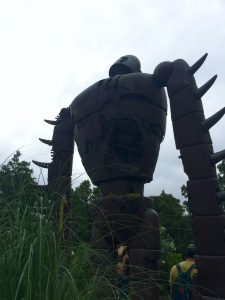 After an enchanting morning, we were ready to head back into more central Tokyo to visit some must-see tourist locations. First on the list was Shibuya Crossing, rumoured to be the busiest intersection in the world. With every light-change, hundreds of people go in every direction while somehow still managing to dodge each other – and when we arrived the bustle was no less than described. As there’s only so long you can last in such a busy place, we moved on to a quieter location – a cat cafe on the 8th floor of a building. Upon emerging from the elevator, we were immediately given slippers and shown to the main seating area, centred around a huge cat tree. In such a densely populated and cute loving city, cat cafes are commonplace, and Cafe Mocha that we visited seemed to have picked only cats suitably pastel coloured for the aesthetic, which was very relaxing. 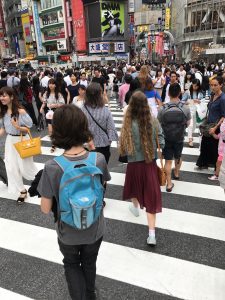 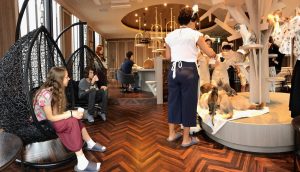 To round off our first full day in Japan, what better meal than sushi? We found a nearby conveyer belt restaurant, where despite my aversion to some things (namely fish roe and squid), we ate a delicious meal. One thing to note however, is that although each dish is pretty cheap, the plates stack up quickly! 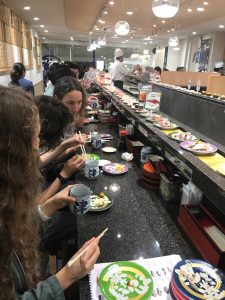 The clouds parted for our last day in Tokyo, and in fact the burning sunshine meant we were grateful to escape the heat in the air-conditioned National Museum in Ueno park. There we were able to see intricately painted traditional screens and many samurai relics. As everyone should agree, food is the most exciting part of any outing, and wandering the streets near Ueno station was certainly an enticing experience. A matcha ice cream was the perfect antidote to the temperature (though it had to be eaten quickly to avoid drips!). I then found taiyaki, which I had previously only been able to ogle online. It is a delicious fish shaped pancake, filled with red bean paste – a sweet and tasty mix unique to this area of Asia. 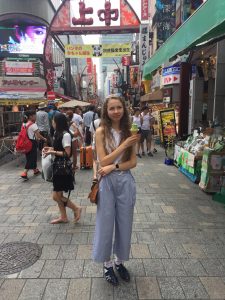 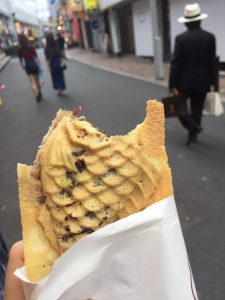 Next we visited a small and lovely origami gallery and studio, in which there were such delicate models of women in kimonos that it was hard to believe they were entirely constructed from paper! The wide range of papers available in the shop were all so beautiful, some floral and some gilded, that we spent a long time simply admiring them while listening to an old man explain that he was the fourth generation of a family of origami masters – it is certainly an art form passed down through the ages to rival any other! 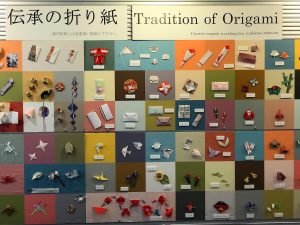 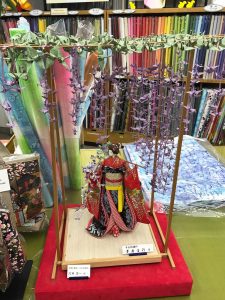 The one major location left on our list was Akihabara, gamers delight! So on the metro we hopped, and shortly emerged to bright lights and anime girls as tall as the tower blocks they were plastered to. The sheer quantity of lovely plastic trinkets and models available here is impressive – one shop we entered filled five floors with merchandise of many different anime shows.

Tokyo was everything I hoped and more: it is so enormous and interesting that one could never hope to experience it all in only a few days, but my first plunge into Japanese culture and life abroad was certainly wonderful!

I’m Ada, a British student studying for my undergraduate degree at KAIST in South Korea.